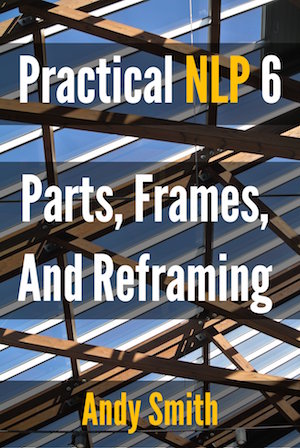 Outframing means broadening or pulling back the frame to see how the meaning of something changes when seen in a different, wider context.

In their vast endeavour The Encyclopedia of Systemic NLP and New Coding, Robert Dilts and Judith DeLozier outline a process called ‘Belief Outframing’, in which you examine a limiting belief (one that stops you from achieving as much as you could) from different perspectives.

The perspectives they suggest are past, present, and future, combined with ‘first position’ (seeing things from your own point of view), ‘second position’ (the viewpoint of a sympathetic friend or mentor – someone who knows you and believes in you) and ‘third position’ (a wise and caring observer who sees you within the wider system of your environment and your relationship to it).

The process assumes that the limiting belief is held from the perspective of ‘first position present’ (i.e. you, now) and suggests seeing what it looks like from the eight other possible combinations (first position future, second position past, third position present, and so on) in turn. From each perspective Dilts and DeLozier suggest offering a message or new belief that would help to loosen the limiting belief, making it more likely that you can change or let go of it.

As I see this process, there isn’t much difference in practice between ‘second’ and ‘third’ positions. Both are looking at you as another person would see you, and the advice offered in the examples given sounds pretty similar.   Therefore, for this exercise I suggest merging ‘second’ and ‘third’ positions (in some other NLP processes ‘second’ and ‘third’ positions play very different roles and it is valuable to preserve the distinction) to the perspective of someone who sees you in the context of the wider systems of which you are a part (family, work, the physical environment around you, your interests, and so on) and cares about your well-being, but with enough detachment that they don’t get sucked into the limiting beliefs that you need to change.

Also, the messages from each perspective are statements that could be accepted or rejected by the ‘you’ with the limiting belief. I suggest it’s more helpful to ask questions from each perspective that aren’t trying to impose a different belief, merely inviting you to consider the situation from a different viewpoint and see how that might change your belief. In order to answer a question, you have to ‘try on’ the presuppositions and perspective built into it, and this might be enough to bring about a change in what you believe about yourself, the challenges you face, or your abilities to deal with them.

Here are some questions that you might ask from each perspective:

First position future: What will it be like when you have resolved this issue fully?

Notice that this question isn’t asking you how the issue will be resolved (the limiting belief is probably saying you can’t resolve it, or it will be impossibly difficult, otherwise you would be on your way to resolving it already). Instead, it’s just asking you what would be different. As soon as you have an idea about what the future with the issue with the issue resolved will be like, the part of your mind that likes to solve problems will start thinking of ways to get there.

Alternative questions: How will you know when you’ve resolved this issue fully? Or you could use the ‘Miracle Question’ from solution-focused therapy.

You may have noticed how these questions presuppose that you are going to resolve the issue fully. If you’re thinking “but I can’t resolve the issue”, we could ask “yes, and, what would happen if you did?” The point is to focus attention not on the issue in the present (which after all has not worked up to now) but to place it in the future, where we are assuming there is a solution, and to start exploring that.

Third position future: How long before you look back at now and that stuff that was going on and laugh?

When it’s far enough in the future that you’ve got beyond this, and you look back at the successful resolution of that issue, what did you need to learn?

Imagine your future self, when you’ve learned how to deal with this and get beyond it so you’ve left it far behind. If you were to look back from that perspective, what advice would you give to that ‘you’ at now?

What resources or learning would your future self need to acquire in order to resolve this issue? (and what would it be like if you had those resources now?)

What will be the consequences of you resolving this issue?

First position past: Where did this belief come from? Would I still choose it if I revisited that time?

Third position past: Seeing yourself at that time, and all the influences on you, how would you look at things differently?

What led you to start believing that?

Looking at all the other issues you’ve overcome, and everything that you’ve learned along the way to get to where you are, what does that tell you about yourself?

Going back to a time before you decided to believe that, and looking at the choices in front of you, what would you choose to believe now?

If you could choose to believe something different, right now, remembering that beliefs start to generate their own supporting evidence as soon as you hold them, what would you choose to believe?

What is the highest purpose of not wanting to let go of this belief now?

First position present: Bringing everything you’ve learned and noticed from these different perspectives back to you, now, notice what’s different, even if only a little.

Some of these perspectives will probably give you more insights than others, and it might be a while before the answers come to you, so leave some time for the answers.

These are just ideas for questions. You could generate more questions by going to each viewpoint and noticing what information could be explored from that viewpoint. Make sure that your questions have empowering presuppositions built in – best done by assuming firstly that the issue will be resolved (so think “when this issue is resolved” rather than “if this issue is resolved”) and secondly that you and anyone else involved was making the best choices they could in the situation as they saw it at the time, given their map of the world.

This article is an extract from Practical NLP 6: Parts, Frames, and Reframing, the latest book in the Practical NLP series – get it from Amazon UK or Amazon US here: