Have you ever tried to compliment someone and they’ve taken it the wrong way? Or had someone tell you “Now just calm down” when you weren’t actually annoyed? (or not until they told you to calm down anyway).

What’s happening there is that the person has taken something that they’ve noticed about what you’re doing, interpreted it through their own mental filters, and come to the wrong conclusion about your intentions, or about what you are thinking and feeling. In NLP, this is known as ‘mind-reading’ – they can’t actually read your mind, but they are acting as if they can.

Pretty much everyone does that from time to time. In fact, our unconscious minds are mostly pretty good at reading non-verbal signals and using that information to guess at someone’s state, so you can get an idea of what they might do next, when to back off, when is a good time to ask them for something, and so on.

However, our perceptions are not infallible. Sometimes, because our filters delete, distort and generalise incoming information, or because we might project unrecognised emotions of our own onto the other person, we get it wrong.

Going back to the person who tells you to calm down when you’re not annoyed: if you tell them that actually you are calm, and they refuse to believe it , trusting their own intuition over the evidence, and continue to insist that you are angry, what would you think of them? The chances are that you wouldn’t place much trust in their judgement, since they don’t seem to have a feedback loop to update their first impression with new information.

They might go on to tell you that they are a very intuitive person and they are never wrong about how a person is feeling. Would you believe them, and start thinking ‘Oh actually, I must be angry, even though I’m not aware of feeling anger”?

It seems unlikely. But you might want to check your physiology, just in case. If you find that your fists are clenched, and your teeth are gritted, and you look in the mirror and find you are frowning intensely, you might update your opinion on whether you are showing anger or not. The evidence of how you are behaving would lead you to update your first impression of how you were feeling.

Sometimes we human beings are not very self-aware – if our attention is focused elsewhere, we may not know how we are feeling. Also, most of the time, we aren’t aware of the real reasons why we do things. 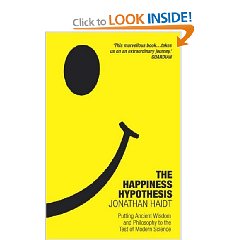 The psychologist Jonathan Haidt, in his great book The Happiness Hypothesis, likens the mind to an elephant with a rider. The rider – our conscious self – thinks he is in control, and that he is telling the elephant what to do. Actually the elephant – which is, essentially, our unconscious mind, makes most of the decisions. If you’ve ever wanted with all your willpower to stop smoking, but still found yourself lighting up, you will know what I mean.

Because we want to feel like we are consistent, the rider will make up reasons after the event to explain what the elephant has done – a process psychologists call confabulation. These are usually unrelated to the real reasons. The rider isn’t lying – he really believes in those made up reasons. They just usually aren’t the real ones.

So if you have a problem with someone acting a certain way, asking them “Why?” will probably not get you much useful information. Even assuming they aren’t trying to excuse or justify their behaviour, and they actually want to give you an honest answer, what they will give you is the rider’s explanation – which probably won’t be the real one.

So the only reliable information about a person is their behaviour. If you were to rely just on your intuitions about their thoughts and feelings, you might be right most of the time, but occasionally you would be mistaken because of the deletion, distortion and generalisation imposed by your mental filters. You need to update your opinions with what you observe of their behaviour.

If you were to rely on what they tell you about their thoughts, feelings and intentions, you would be getting the rider’s story which might bear no relation to their real motivations.

So it’s behaviour that actually counts. The same applies to you – the only reliable information about you is what you actually do.