The rising intonation is a form of analogue marker that tells the listener’s unconscious mind to “pay attention, this is a question”. It invites a response – the answer to the question.

The downward intonation is another analogue marker that says “pay attention, this is a command.”

There are actually two ways in English that you can tell whether what someone is saying is a question or not. One is that rising intonation, and the other is the syntax (word order). The most common question syntax, as you know, goes like this: “Would you like to include the optional extras?” or “Are you ready to try this out?” You put a question at the front – ‘would you like to…’ or ‘are you ready to…’ and follow it with the fact or action that you are inquiring about.

So when you use the question syntax with a command tonality, that’s a powerful way of influencing people. Consciously, the word order tells them that they are hearing a question, but their unconscious mind also picks up on the command. “Would you like to include the optional extras” or “Are you ready to try this out.”

Just a caveat about the ‘high rising terminal’, as the rising intonation is called. This is increasingly used by younger people in the UK and US, and particularly in Australia, for statements and even commands as well as questions. If you find yourself using it a lot, you need to be aware that it also makes you sound uncertain and lacking authority in certain situations – for example, in presentations, and when you actually do want someone to do something. 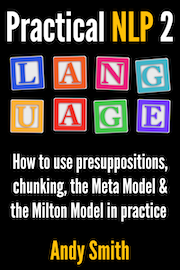 If you want to discover more about NLP language patterns, download my Kindle e-book Practical NLP 2: Language, which tells you all about chunking, presuppositions, the Meta Model for effective questioning, and the Milton Model for conversational hypnotic suggestion, and something about metaphor too.