One of the great things about the NLP SCORE model is that you can improvise with it. Last weekend I was demonstrating how to use the SCORE for coaching in the Advanced Coaching Skills module of my NLP Master Practitioner course with a ‘client’ who wanted to dispel his nervousness when driving on motorways.

He described the Symptoms, the original event that ‘Caused’ the problem, and his desired Outcome. When he stepped into the Resource space and improved his state markedly with the many resources he found there, I had a mini-flash of inspiration and asked him to look over at the Cause event from the Resource perspective and tell me what he noticed.

He realised something that he hadn’t previously. It wasn’t that he remembered anything new, rather that he had an insight for the first time about what was present in the ’cause’ event that contributed to the problem.</>

How did this happen? I believe it was because for the first time he was able to consider the ’cause’ event while feeling resourceful, and with a greater detachment (because of the physical distance between Resource and Cause positions) than he had been able to achieve previously. “Strong emotions make us stupid”, as neuroscientist Joseph LeDoux says; previously, the client had been somewhat distressed whenever he thought about the incident – enough to stop him getting useful insights about it, anyway.

This kind of effect is why the SCORE is more powerful when you physically walk through the different positions than if you do it as a pen-and-paper exercise.

If you would like to find out more, try these books: 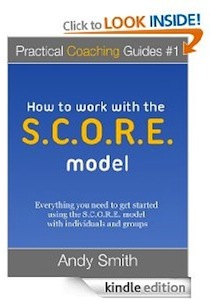 How To Work With The SCORE Model by Andy Smith

If you would like an easy-to-use coaching and problem-solving model that you can also use with teams, this e-book is for you. The S.C.O.R.E. model is part of the NLP toolkit, but you can still get good results with it even if you don’t have any NLP experience.

This book gives you some tips I’ve picked up for getting the best from the SCORE model in practice, with individuals and teams. Download it instantly from your local Kindle store.

Note: this e-book is in Kindle format. You can easily read it on almost any other device (computer, smartphone table) by downloading the free Kindle reader app from Amazon. 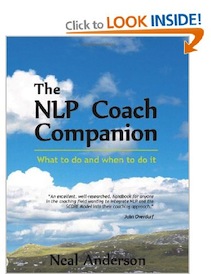 The NLP Coach Companion: what to do and when to do it by Neal Anderson

Neal shows you how following the natural process of change gives you an effective system to help people overcome limitations, produce results, increase focus and reach goals in their personal and professional life.”

Paperback – order it from the Amazon store for your country