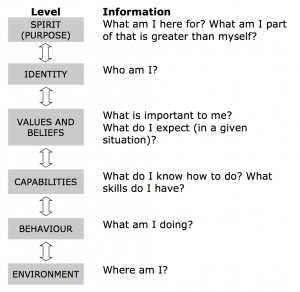 How does the Levels of Change (also known as “Logical Levels” or even “Neuro-Logical Levels”) model relate to organisations and businesses?

It was easier to see how the model relates to branding because we were focused mostly on service companies, where the brand and the organisational culture are the same thing (or should be at least – if the customer-facing brand and the internal culture of the company are different, the customer is going to notice the discrepancy every time they have contact with the company’s employees).

You can understand the whole culture of an organisation, how it relates to its customers and competitors, and how that culture changes, in terms of levels of change. It doesn’t matter whether the organisation is a small consultancy, a big multinational, a public sector organisation, or a charity.

Let’s see how it works. The Environment level is the space in which the organisation operates. So it includes the customers – who may be segmented into several different markets – suppliers, competitors, and also external constraints like the legal framework and regulations that the organisation has to operate in. It also includes the physical space (offices, warehouses, showrooms, factories) and virtual spaces (websites) that the company operates in. Finally it would include the community that the organisation is located in, and the communities and families of its workforce.

Behaviour includes what the organisation does – not just making or selling things, but how it communicates with its customers and how it treats its own workforce.

Capabilities are the skills the organisation needs in order to perform the appropriate behaviours, and also to adapt itself in the face of change.

The organisation’s Values are what is important to it, and also the criteria by which it decides whether it’s doing a good job. In practical terms these translate into metrics and targets. The other side to values is that in theory at least they provide the motivation for what the company does. Where there’s a gap between the organisation’s values, and the values of the individuals who work for it, there may be motivation problems.

Beliefs are what people in the organisation collectively believe about what they are doing. They are how people make some kind of sense of what they are doing and what’s happening around them, and they are transmitted and maintained in at least two ways. One is by official pronouncements – by such means as the chairman’s speech at a get together, managerial pep talks delivered to a team, or those motivational posters you see which show some kind of noble animal or beautiful landscape together with a slogan that’s meant to be inspiring.

The other way that beliefs are transmitted and maintained is unofficially, in the conversations that people have with each other (and with customers, suppliers and so on), and in the notices that people stick up on their own initiative like “You don’t have to be mad to work here but it helps”.

Beliefs are important: they form the ‘map of the world’ that people in the company operates from, being woven and maintained moment to moment in day-to-day conversations. People will make the choices that make sense within their map, so what they believe has a direct effect on what they do. You can probably guess which set of beliefs people will choose to adopt if there’s a discrepancy between official and unofficial versions of reality.

The Identity level, of course, is about ‘who we are’ as an organisation. Every organisation has a sense of itself and its role – partly made up of ideas about what its intrinsic qualities are and partly from how it sees itself compared to its competitors.

This is important. In the 1994 book Built To Last: Successful Habits Of Visionary Companies, Jim Collins and Jerry Porras identified a number of what they called ‘visionary companies’ that consistently outperformed the stock market – by a factor of 15 times from their starting date of 1926. The key difference between these visionary companies and their competitors was their focus on the company itself and what it stands for – its core ideology and purpose, its core values and the culture that puts the purpose and values into action.

In levels of change terms, the focus of these visionary companies is on the upper levels of the model – on Purpose, on Identity, and on Values and Beliefs. By contrast, other companies which performed OK but not as well are focused more on the Environment level – on what they think their market wants and on what their competitors are doing or might do.

The organisations that really make a difference, that really create something new – as opposed to me-tos and also-rans – focus on the difference they can make, and on being the best they can.

You may have noticed the way that original, one-of-a-kind movies that prove to be successful are often followed by a swarm of copycats that aren’t as good. Like the pile of not-very-good British gangster movies came out after “Lock, Stock and Two Smoking Barrels” was a hit, or the long, dull, sword-and-sandal epics with huge computer-generated battle scenes that followed in the wake of “The Lord of the Rings”. Or the way that Hollywood studios will always find it easier to make another sequel, each one worse than the last, rather than break new ground with an original movie idea.

That kind of output is what happens when organisations focus purely at the Environment level – what the market wants – rather than at the level of Purpose. But as that great innovator Steve Jobs of Apple said, “It’s really hard to design products by focus groups. A lot of times, people don’t know what they want until you show it to them.”

When you focus at the higher levels of Purpose, Identity and Values, you can keep your motivation strong and adapt to changes in the marketplace and technological innovations while staying true to your essential nature.

In order for an organisation (or a person) to be at its best, the levels need to be in aligned with each other. For example, if the organisation has ‘Respect’ and ‘Integrity’ as stated values (as Enron famously did in 1999) but treats its people badly or cheats its customers, what are people going to believe? What they say, or what they do?

The best way to ensure that Values – and hence Identity – reflect the reality of the organisation’s Behaviour is to involve people at all levels in crafting what they should be. That way, you keep it real and avoid the cynicism that results from espoused values being too different from what happens in practice. The change method known as Appreciative Inquiry is a great way of involving people.