Some of these methods involve stepping back from the belief and viewing it from a wider perspective (as can sometimes happen if you have a conversation with someone who doesn’t share exactly the same belief system as you), while others are about examining the assumptions underpinning the belief in more detail and comparing it to the reality of your experience.

The first method we can use is in the “stepping back” category. Specifically, it’s about stepping back from being immersed in the moment and looking at the future consequences of continuing to hold that belief. The question to ask yourself is, “If I go on believing this, what will be the consequences?”

You can go into more detail by looking at specific areas:

“What will be the consequences for me?”

“What will be the consequences for the people I lead/manage/coach/parent?”

“What will be the consequences for my business?”

This won’t necessarily change the limiting belief by itself. What it will do is make you more motivated to do something about it.

When we become convinced that something needs to change, our minds automatically start looking round for ways to change it. This is useful when it leads to you finding a solution, but not so useful if it leads to unproductive worry. So you need something that turns your mind’s attention to where it is most likely to find the change you need – such as these questions:

“What would it be useful to believe instead? What could I believe that will lead to a better result?”

Let’s be realistic: you aren’t easily going to be able to start believing the opposite of a long-held limiting belief just by wishing it. Even if you have a new belief system ‘installed’ by going on one of the more cultish weekend personal development courses, the old beliefs will often gradually reassert themselves.

Single beliefs don’t exist in isolation. They are part of wider ‘belief systems’ which are compatible with and support each other. If you were to change just one belief, the other beliefs in the system would try to pull it back into line, in an attempt to avoid ‘cognitive dissonance‘, the uncomfortable feeling of holding two conflicting ideas simultaneously.

So effective belief change will need to find ways of changing the belief which are consistent with everything else you believe, and with your values – what you hold to be important. It sounds like a tall order, but fortunately very few belief systems are completely airtight. There is usually some ‘wiggle room’ in belief systems, because we use categories in our thinking that are fairly vague and ‘fuzzy’. For any category (e.g. the category of ‘leaders’) or concept (e.g. ‘leadership’) that we hold in our minds, there are will be certain examples that we think of. But there are many other potential examples available besides these; and if we find enough new examples of a more useful kind, our beliefs about what these categories and concepts mean will shift in a more useful direction.

Many limiting beliefs define things that are important to us (e.g. ‘leadership’) in terms of a particular activity. These kind of beliefs could stem originally from what we have been taught, or from conclusions we reached ourselves at an early age from examples we observed. For example, we might hold a belief like the one that featured in the previous article: “you’re only a leader if you are directing or advising your people all the time”.

The problem with beliefs that equate qualities (like leadership) to particular activities is that there will be some situations in which that activity doesn’t constitute that quality, and some where the activity leads to the opposite. In this case, someone who is expert at their job, and knows more about it than you do, might not find your direction or advice helpful, and in fact might be demotivated by it and perform less effectively.

This is bound to happen. ‘Leadership’ is an abstract quality, ‘directing and advising’ are actions. You can’t reduce one to the other. How do we get round this, without adding in a never-ending list of additional actions, especially if the actions appear to contradict each other (‘leadership is about directing or advising people and about shutting them up and letting them get on with it’)?

What you can do is lift your sights and focus your belief on consequences rather than activities. How about this: “leadership is about effectiveness”? Which begs the question, “What does effectiveness mean? What do you need to do to be effective?” I’m fine with these questions, because they set your mind off on a quest which is evidence-based rather than relying on something that made a big impression on you when you were six, that you may have misheard and almost certainly didn’t understand fully.

So in the quest to make sense of the concept of leadership by seeing how it plays out in the real world, you might end up with something like “leadership is about enabling your people to get the best results”. That still has an activity in it, but you will notice that ‘enabling’ is a lot vaguer, and hence more flexible, than ‘directing’ or ‘advising’. The new belief gives you the flexibility to change your leadership style for different people and in different situations, and without directly contradicting other elements of your belief system.

Having decided what you would like to believe to help you get better consequences, you can set about firming up your belief in it by finding examples of when it has been true. With some reflection, you will be able to find many examples, whether by looking (in the case of leadership) at leaders you admire, or from your own experience. In some cases, you will never have thought of these examples as relating to leadership before, because your previously held beliefs filtered them out.

The more examples you think of, and the more vividly you recall them, the more convincing your new belief will be. If you are good at visualising, make the images of your memories bigger, brighter, and more vivid, and add some movement to make them more convincing. Otherwise, it can be very helpful to write descriptions of the examples and how they support the belief.

Plus, pretty soon you will experience some new examples which support the new belief. Beliefs are self-fulfilling prophesies. They are like ‘rules’ which guide our behaviour – if you change what you believe, you will start to behave differently – plus, through the psychological phenomenon of confirmation bias, our mental filters amplify evidence that supports our beliefs and downplays any evidence that contradicts them.

More ways of challenging and letting go of limiting beliefs next time. Do let me know how you get on by leaving a comment below! 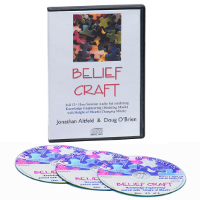 Note: changing beliefs by looking at the consequences is an idea that comes from the set of NLP language patterns known as ‘Sleight of Mouth’. To really get an in-depth understanding of these patterns, and to get access to a very powerful and insightful method of tracking someone’s belief systems as they show up in real time, I highly recommend the ‘Belief Craft’ audio set by two of my favourite trainers, Jonathan Altfeld and Doug O’Brien. I have attended the live training and it’s excellent! It added real depth to my understanding of NLP and more importantly to my ability to understand and change the belief systems of myself and others.