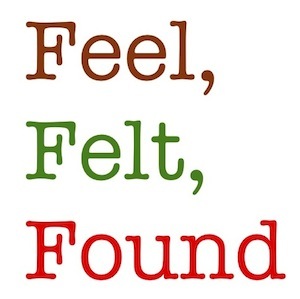 The ‘Feel, Felt, Found’ technique is a classic objection handling technique that most sales people know about. But how well you use it could make the difference between it working as intended, to effectively neutralise the objection in the customer’s mind and move on from it, or alternatively coming across as patronising and increasing resistance still further.

This article looks at the nuts and bolts of what this technique actually does in terms of what the customer thinks and feels (their ‘internal representations’ in NLP terminology), using a particularly elegant formulation from my friend the NLP trainer Jonathan Altfeld as an example.

The standard formulation of the objection handling technique goes like this:

For example:  “I understand you feel that there are cheaper competitors around. One of our biggest customers felt that way initially, but when they tried the service they found that they saved 55% on their cost base.”

Which is fine as far as it goes, and it often will work. There are pitfalls, however – particularly if the customer doesn’t believe that you understood their objection. If you’re not actually interested in the customer except as another sale, so you don’t really care about helping or understanding them, the customer will pick up on that. When you say “I understand why you feel that way”, a little voice in their mind will say “No you don’t”, and you’ve just put a barrier in the way of establishing a genuine rapport with them.

By contrast, have a look at the elegant way Jonathan Altfeld uses ‘Feel, Felt, Found’ in the following example from his recent article on “Influencing the Difficult (or ‘Impossible’) to Convince“, and let’s deconstruct what’s happening with each step.

To give some context for the example: Jonathan’s teaching a communication skills course, and in a discussion exercise, two of the participants haven’t even got started after several minutes. One of the two tells him that they aren’t getting anywhere but it’s not their fault because “Mercury is in retrograde” (apparently a catch-all phrase derived from astrology meaning that “there’s nothing I can do, because the stars are against me” often used to justify giving up” – Jonathan explains it further in his article).

(Note: for convenience, I’m going to call this person ‘the customer’ because Jonathan’s effectively ‘selling’ him the idea of persisting with the exercise rather than copping out and going for an early coffee break.)

So Jonathan suggests that if someone uses this excuse (and they mean it, rather than using it ironically or humorously) you could say:

“Some people feel Mercury in Retrograde is the cause of all kinds of weirdness.”

Notice he’s not saying “I understand”, so the customer doesn’t have that opportunity to question his sincerity. Also, he’s not saying “Some people feel Mercury in retrograde means it’s useless trying to do anything” or “… there’s nothing they can do.” That would tend to reinforce the customer’s limiting belief, so the objection becomes stronger.

Instead, the ‘some people’ that he mentions allows the customer to identify with that group. This identification tells him that what is being said is relevant to him. Talking about other people feeling this way reassures him that he’s not the only one, and to an extent validates the way he feels through Cialdini’s ‘social proof’ principle, which would tend to make him feel more relaxed and open, rather than defensive.

The other thing that this phrase does is to ‘zoom out’ so that now we’re not talking just about the customer as an individual. Rather, we’re talking about a whole group of people, of which he is a part. This ‘zoomed out’ focus gives some detachment so that it’s not just about him any more. Again, this is going to reduce resistance to change. If there is going to be some change, he won’t be facing it alone.

Note also that Jonathan has broadened out the categorisation of ‘Mercury in retrograde’ from being, specifically, an obstacle to our efforts, perhaps an insuperable one, to “all kinds of weirdness”. This ‘dilutes’ the power of ‘Mercury in retrograde’ as an obstruction – after all, there are all kinds of weirdness, and not all of them are bad. Some of them might even represent an opportunity. So this categorisation opens up the possibility for change.

How did Jonathan find another classification for ‘Mercury in retrograde’ that allows for more than just obstruction? Of course, I can’t read his mind, and there may well be all kinds of other clever stuff going on with this reframe that I haven’t noticed, but my guess is that he’s asked himself “What other category could ‘Mercury in retrograde’ be part of, that will be of more help to this person in loosening the belief systems that have kept them stuck?” Probably a number of alternatives came up, and he’s selected the one that fits the job best. In NLP terms, he’s “chunked up” to a category which is at a higher level in the Hierarchy of Ideas.

As with any example of ‘Feel, Felt, Found’, the ‘felt’ implies that although they felt that way in the past, they feel differently now. And here’s another clever bit: the way that many people try to use this technique, we’re expected to believe that what the customer was objecting to magically disappeared when these other people did what the sales person wanted, or tried the product. That’s quite a leap of faith to expect the customer to take.

Instead, in this example, Jonathan says “no matter what obstacles present”. He is not claiming that the obstacles will disappear – in NLP terms this is called ‘pacing’ the customer’s belief system – but “no matter what” implies that even though they may still be there, they don’t matter any more.

“…and found that no matter how much random weirdness occurred, it was still up to us to follow through on all our responsibilities and promises.”

There’s that ‘weirdness’ again, diluted still more by being ‘random’. So it’s not ‘Mercury in retrograde’ malevolently working against you any more, it’s just random noise. It’s still there, just as in real life not everything is plain sailing. By not pretending that everything is going to be perfect in the future, this statement will not trigger the “that’s just unrealistic” objection. It will also help the customer to stick with the more empowering belief that it’s up to him to follow through on his responsibilities and promises when he encounters difficulties in the future. In NLP terminology this is called “future pacing”, and it makes the change more robust and likely to stick.

The general form of ‘Feel, Felt, Found’ is “Yes, you feel X, and some other person/people felt that way, and (or ‘but’) when they did Y they found Z”. This is only powerful, and it’s only going to speak to the person, if the Z is something they want, or care about, or believe in. In this case, the ‘customer’ presumably believes that they should follow through on their responsibilities and promises, otherwise what are they doing on a personal development seminar?

Yes, this belief would seem to contradict the belief that ‘Mercury in retrograde’ can prevent you from making things happen, but of course human beings are quite capable of holding contradictory beliefs. In this case, the belief that one should take responsibility has been active or dominant when the person considers life in general, but the ‘Mercury in retrograde’ belief is triggered when he is called upon to do something difficult or uncomfortable. The “no matter what” encourages the customer to take responsibility even when things are difficult or uncomfortable.

In order to craft ‘Feel, Felt, Found’ patterns effectively, you have to accurately identify what it is that the person is feeling or believing (‘Mercury in retrograde’ in the first part of the pattern) and identify something else they want or believe that is more empowering or useful (follow through on your responsibilities) for what was ‘found’. Effectively you are building a bridge from the objection to a more useful expectation. The belief or desire in the ‘found’ section has to be important to the person for this pattern to work. If they don’t value it, if it doesn’t carry some kind of emotional charge, the pattern will have no power.

Sales and motivation expert Gavin Ingham has another useful tip for strengthening the ‘found’ part of the pattern, particularly in a business context, which is to personalise the ‘found’ example with real life statistics and figures relevant to the customer, so that they can form a clearer, sharper picture of exactly what they could gain if they go with your product or service.

Gavin also makes the very sensible suggestion that you consider the most common objections that you encounter, and practice ‘Feel, Felt, Found’ patterns to deal with each of them.

Let me know how you get on with this pattern, or share any tips and refinements you have, by adding a comment below! 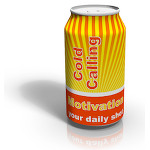