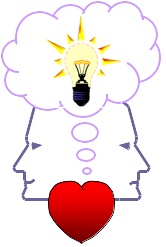 Many people still think that emotions just get in the way of rational decision-making, and that they have no value in the modern workplace.

It’s true that if someone isn’t managing their emotions, and they’re erupting with anger all the time they are at work, that could be disruptive to work with. At the same time, we need emotions to operate at all.

For example, scientists have found that emotions are not the enemy of reason, as was traditionally supposed. Quite the reverse – they’ve studied people who have suffered the kind of brain damage where the connection is broken between the areas of the brain that process emotions and the thinking parts of the brain. Their intellect still works fine, but they become completely incapable of making any kind of decision. When to make the next appointment with the brain specialist, whether or not to wear a tie, what to choose from the menu, they just can’t do it – because without emotion, nothing matters to them. They can compare the pros and cons of each choice, but they don’t get that feeling that tells them when to stop going down the list and just choose one or the other.

In his bestselling book Emotional Intelligence: Why it Can Matter More Than IQ, Daniel Goleman tells the story of one guy that this happened to – let’s call him Elliott – who was a high-powered corporate lawyer. Within six weeks of this emotional disconnect being diagnosed, he’d lost his job, his marriage had broken up, and he was living in a bedsit – all because he couldn’t make sensible decisions without his emotions to help him. So you actually need emotion for your reason to work at all.

Another reason that emotions help in business, as well as in every other area of your life, is that – through emotional resonance and (probably, though they’ve only identified them in monkeys so far) mirror neurons that we mentioned in previous articles – they give you information about how other people are feeling, which is helpful for guessing what they might do next, how they might react when you tell them something, when they are ready to buy, or when you should shut up and move on. If you didn’t have that ability, you would constantly be putting your foot in it, saying the wrong thing, and be thought of as very hard to work with.

Emotions also give us information about things in our environment that our conscious mind might have missed. You know when everything looks good on paper but you have a niggling feeling that you’ve missed something? If you’re smart, you’ll recognise that that feeling is trying to tell you something, and you’ll take another look to see what you’ve missed.

I want to distinguish here between these “signal emotions” which give you information about what’s going on around you and which are quite fleeting – once you’ve noticed them, there’s no need for them to hang around – and “mood”, which is more persistent and can stick around for days or weeks. Mood is the baseline, and the signal emotions give you fleeting variations from that baseline. Positive Psychology researchers like Barbara Fredrickson have found that people are more productive, creative and resilient when their underlying mood is positive.

Finally, emotions are what motivate us. We’re not like robots, working at a constant rate all day. We can achieve far more when we are feeling motivated – either towards somewhere that we want to get to, or away from somewhere that we want to escape from. Effective leaders can evoke motivating emotions in the people who follow them; if a leader can’t do that, they’re at the mercy of events, and if people happen to be feeling down that day, not much will get done. People who work for themselves or by themselves need effective ways of motivating themselves if they are going to achieve anything.

So emotions are important because they help us to make decisions, they give us information about how other people are feeling and how they’re going to act, and they are essential for motivation.

In the last twenty years or so, researchers have been looking into something that’s always been pretty obvious: IQ or intellectual ability on its own doesn’t guarantee that you’re going to be successful, in life or in business. There are plenty of extremely bright people doing dead-end jobs with no money and no close relationships.

Clearly, you need something else as well: the ability to know what you are feeling and what’s important to you, the ability to notice what other people are feeling, the ability to manage your own emotional state, and knowing how to handle and inspire emotions in others. Researchers such as John Mayer and Peter Salovey and Reuven Bar-on found that this set of abilities, which they called emotional intelligence, met all the academic criteria for being defined as a proper intelligence, and made a big difference to the results that people can achieve and consequently how successful they are.

Daniel Goleman, who has done more than anyone else to bring the idea of emotional intelligence into the mainstream, has a neat four-quadrant model of emotional intelligence. It has ‘self’ and ‘other’ on one axis, and ‘awareness’ and ‘actions’ on the other. So the four quadrants are Self-Awareness (understanding your own emotions), Social Awareness or empathy (being aware of other people’s emotions), emotional Self-Management, and being able to inspire and handle emotions in others, which he calls Relationship Management. 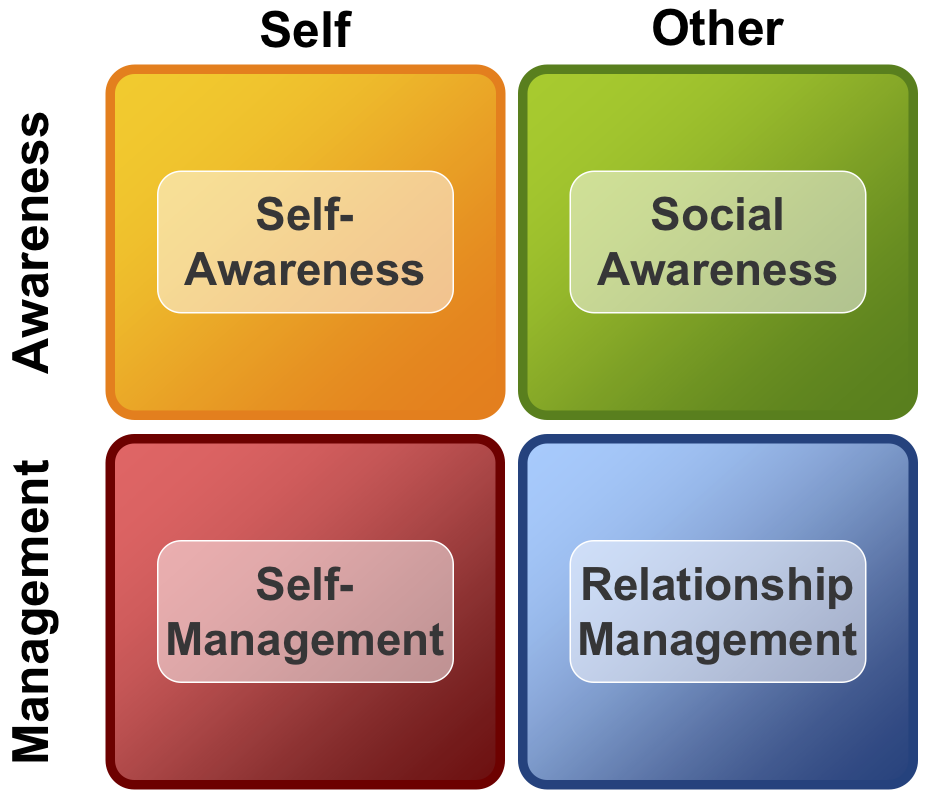 The more I looked at these four components of emotional intelligence, the more I realised that NLP gives you a comprehensive toolkit for developing your abilities in each of these four competency areas.

We’ve already talked about developing your social awareness in previous articles about sensory acuity and rapport. You can also find some tools for managing your own emotions in earlier articles about submodalities, for example how to silence the ‘inner critic‘, and ‘mapping across‘. And we’re going to learn a lot of other effective ways to defuse emotional triggers, to move from an unhelpful emotional state to a more resourceful one, or just to be able to access exactly the right emotional state exactly when you need it, in future articles about Anchoring.

You’re also going to learn ways to use state elicitation and anchoring to be able to handle and inspire emotions in others – an essential skill, maybe the essential skill, of leadership. Plus, the cornerstone of emotional intelligence is self-awareness, and we’re going to experience some practical ways of developing that, in the next article.