My last posting about open and closed questions prompted this response from a reader, which got me thinking about how questions from the NLP Meta Model, or any kind of “challenging” question, have to be used with care if you don’t want to wreak havoc on your working relationships (he’s kindly given me permission to publish his question):

I was recently posed a question by an employee stating that something “Always” happened. I knew that it didn’t happen all the time and when I replied by returning the question “Always?” I was told by my peers that I was being aggressive and not adopting a coaching approach.

How should I, in your opinion, which I respect, should I have dealt with the question without closing the conversation and without sounding patronising?

That ‘always’ is an example of what is referred to in many books on NLP as a ‘Meta Model violation’. The very term ‘violation’ suggests something that is wrong, to which a ‘Meta Model challenge’ would be appropriate. Even if you don’t intend it, the bald use of a response such as ‘Always??’ may be received as aggressive or patronising, and consequently damage the relationship.

There’s an ‘early days of NLP’ story (which may or may not be apocryphal) about John Grinder teaching the Meta Model to his Linguistics class at the University of Santa Cruz, quite soon after he and Richard Bandler had come up with it. The students went out buzzing – they couldn’t wait to try out these amazingly precise questions and start uncovering the missing information and thought patterns that underlay the ‘surface structure’ of what people said.

The following week they shuffle back into the classroom looking like they’ve been through hell. They looked tired, scruffy, depressed; some of them had obviously slept in their clothes, others had been crying, and one or two had black eyes. Grinder asked them what had happened. “Well,” said one, “I tried out some Meta Model patterns on my wife, she was getting more and more pissed off, and after about half an hour she kicked me out of the house.” Every student had a similar tale of woe – “I had a stand-up fight with my best buddy”, “My family have disowned me” and so on.

That’s what the Meta Model questions will do if you use them without regard to maintaining rapport. Nobody likes being interrogated. Here’s how to use these very powerful questions to make your life easier rather than harder:

Sometimes it’s enough to just deliver the question in a softened, or humourous, tone of voice. Other times, you may want to ask the question in a different way, with some verbal ‘softeners’ around it. For example:

“So, I’m wondering if there’s ever been any times when there are exceptions – when something different happens?”

Or you could use a ‘reflecting back’ statement which will be taken as you checking your understanding, while at the same time posing the question in a non-threatening way: “So what I think you’re saying is, this happens every single time, and there have never been any exceptions?” which you could follow up with “Are there any circumstances in which it doesn’t happen?”

Again, you could soften these still further by adding “Let me just check my understanding…”. Or with the follow-up, you could say “Could there be any circumstances in which it wouldn’t happen?” which is hypothetical and unthreatening.

These kind of considerations would apply to using any kind of “challenging” question. Remember, your long-term relationship with the person is at least as important, if not more so, than retrieving any specific example of missing information or exposing a particular misconception in their thinking. 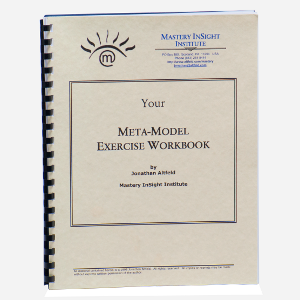 If you want to get really good at recognising Meta Model patterns and thinking of appropriate questions, you need to practice. A good study aid is Jonathan Altfeld’s Meta Model Exercise Workbook. It includes 12 sections (1 for each Meta Model pattern), and within each section, includes a Definition, Examples, Questions to ask, and 1 or more exercises to help you develop your skills. Find it here.