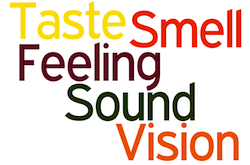 Sensory acuity in NLP is about paying more attention to what’s going on. It’s not about actually making your eyesight better so you don’t need glasses – although there is at least one NLP-based course that does do that, and I know at least one person who says he got significant improvements from it. No, it’s about noticing more by paying attention to the information that was there all along.

People give out huge amounts of information from moment to moment. Changes in their emotional states and in what they are thinking about cause changes in their physiology. We can notice these changes – if we bother to look for them.

Sometimes these changes are subtle, sometimes they are so obvious that you’ll wonder how you missed them previously.

Rather, we’re talking about noticing changes in the outwards signs of inner state changes and processing – the ‘behavioural manifestations of internal representations’ as you will sometimes hear it referred to in NLP.

Why is this worth noticing? Because if you notice a change in someone’s physiology or a shift in their voice tone that’s telling you that some sort of interior change has happened. If you observe it consistently happening in a particular situation, or in response to something that you’re doing, you can get an idea of what it means. The more you notice, the better you will get at ‘reading’ people.

Also, the more you practice paying attention, the more you can track these subtle changes in people’s state with your unconscious mind. Imagine gauging exactly the right time to ask someone on a date, introduce a new idea, or close a sale. The more you notice about a person, the easier it is to do that.